Difference between revisions of "Core elements"

From RailTopoModel® Wiki
Jump to navigation Jump to search 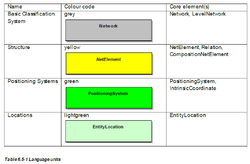 The Model is formulated in Terms of UML. The Sections of this Chapter correspond widely with the Colors in the UML-Diagram:

The complete RailTopoModel is available at railml.org.
Language units are depicted using specific colour codes and are centered around core elements. 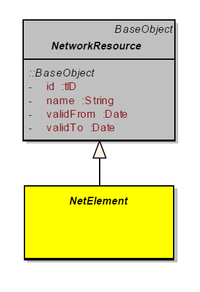 The first thing to be done is to list the elements comprising the core of the network.
Each of those elements must have some basic characteristics: a unique identifier, a name and a validity range. So the first step is to create a generic class containing those data. According to the view level the network is composed of

Each of those being uniquely identified (ideally with an UUID, but any unique national identifier is allowed) and given a temporal validity range. This validity range is the first step in time dimension and versioning management, which will be extended in future versions of this model. As the model aims to be valid through all detail levels, a neutral name has to be given to those elements forming the network: the “NetElements”.

The common point between all those levels is that two types of NetElements have to be considered:

Up to now, the model makes no distinction between those two types of elements, because they share so many characteristics.