It could be read as “At coordinate X after the start of the element”. 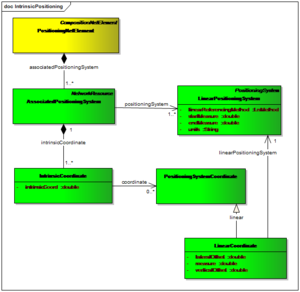 
Now that the elements have been listed, the next goal is to provide a way to place items on these elements: a referencing system.
As there are a great many referencing methods available, and as the model has to be able to cope with many sources that are using different types of units or reference point, the underlying structure of the model is a unitless and universal method. However, later on means are being added to use any other referencing method, as long as the reference system is described.


It implies that, in this model, an item may be located anywhere “along” a linear element (coordinate ranging from 0 to 1) but only “at” a nonlinear element (coordinate ranging from 0 to 0… that is 0).
As the applied reference system is universal, any object can be attached to the network with a coordinate “Element, Position”. However, if this reference system is univocal, it is unreadable by a human. A conversion to more widely used coordinate systems will be discussed in the annex to this document.

In terms of class diagram, the Generic NetElement class is extended with a class in which the intrinsic coordinate system is defined. The only role of this class is to know that the NetElement is oriented (linear) or not (the role of the CompositionNetElement class will be discussed later on).
While universal and deterministic (no two different locations on the network can point to the same coordinate – no single location on the network can have two coordinates), this referencing system is strictly logical and not human-usable. The link to Geographical/Geometrical or the more widely used Mileage system is part of chapter 6.6 Aggregation.

In summary: from 2e bullet to last one: is there any positive business case thinkable? Probably not.
Consequence: the modeling group has to reconsider the utilization of the intrinsic positioning method !!

Reminder:
The main purpose of the Intrinsic positioning system is to provide an universal way to store/transmit the position of the INTERACTION between the network and objects/events.
It is thus not intended to manage the (position of the) network/objects themselves.
Its accuracy depends on the accuracy of measurement of both interacting elements : the network and the event. Its lack of accuracy is not inherent to the storage method, but more of the accuracy of the measurement methods of each elements.
It is only currently described as the only referencing method because, up to now, we did not describe the objects. When designing the object classes, other referencing methods may (and will) be used as primary system.
It is a calculated value, especially useful when computing. It is thus not intended to be “Read” or “Written” by an human being. It is also not intended to be used in the field by human beings, as most of the time they don’t need to know the interaction between the object and the network, but rather the position of the object itself.
As it is the interaction between two elements, it has indeed to be recalculated as any of those elements changes. And it cannot be otherwise, because if one of the two element changes, the interaction also changes.
However, it only need to be calculated when knowing the interaction between an object and the network is needed (or before the transmission of data).
Its advantages are multiple when computing or transmitting data:

Application to the model

We only take spot objects and assume there is no mileage anomaly, in order to keep it simple.
The model allows two possible approaches:

We manage the intrinsic coordinate for each object: 0.19191919
As the relation between the intrinsic and the linear reference systems is known, the translation may be done to the linear coordinate system if/when needed.
However, it is not a very user friendly way to manage data that has to be manually entered.