The RailTopoModel data structure is centered around the network. The Network is used as the main reference system for positioning of arbitrary information objects. These information objects are modelled as a generic class called “NetEntity”.
This layer allows the user to project objects and entities on the topology, by referencing topology elements. Three types of generic entities, that can be located on the network, were identified:

One entity can have more than one location. 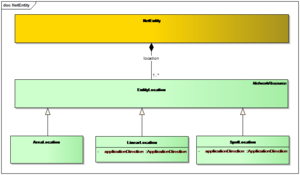 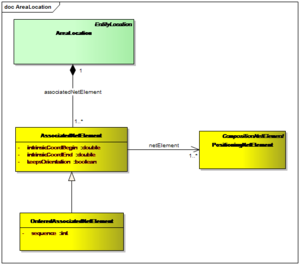 An areal object is a sub graph (a continuous fraction of the network), that is comprehended as an object.
It is defined analogously to spot- and linear entities, by listing the ElementParts member of the location.

The name areal object was chosen because most practical examples resemble an area. In the context of RailTopoModel an “AreaLocation” instance defines a subgraph (a continuous fraction of the network).
It is produced by listing the ElementParts member of the location.

This type is located by the type of class: AreaLocation. The area location, in this case, is defined by a set of net elements with a pair of positions (beginning and end in intrinsic reference) for all elements.

Many “NetEntity” instances can be seen as paths.

To describe a path location, a start point, an end point and an ordered list of every encompassed element, is needed.

The start and end points are point locations, thus either a nonlinear element or a point along a track edge.
The path should be a topological path, meaning that at each nonlinear element only one exit direction can be taken.
If the start- or end point is a nonlinear element, this element is fully encompassed within the path.
The correct ordering of the list should be checked against the topology definition of the network. This could be the task of a validator. The orientation of the path on each track edge can be deduced from the order of the crossed nonlinear elements.
This type is located by the type of class: LinearLocation. The linear location, in this case, is defined by an ordered set of net elements with a position (in intrinsic reference) for the first and last element. 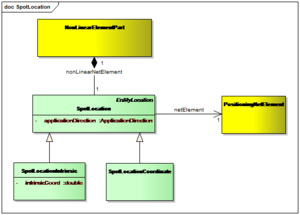 If it happens along a track edge at a certain distance, it is necessary to defined whether this entity happens directly on the track edge, or alongside the track edge; and if the entity occurs in both directions or only in one. These types of entities are located on the network by the type of class: SpotLocation. It is possible to have more than one location for a punctual entity: