From RailTopoModel® Wiki
Jump to navigation Jump to search 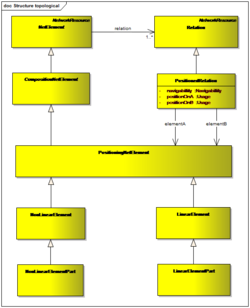 The topological structure of the network describes the relations of the building blocks of the network in the context of a given description level.
The class “NetElement” depicts all building blocks of the topology. In a classical physical description it consists of what is commonly called “nodes” and “edges”. In the optimised description for fast operational computations the physical nodes are removed and only the edges remain. The properties of the physical nodes are the basis for the relations. A detailed description of the conversion from the classical description into the optimised connexity based description can be found below.
Therefore the class “PositionedRelation” which is inheriting the associations to “NetElement” contains attributes which describe navigabilty as well as hints for the position at the associated “PositioningNetElements”.
The classes “LinearElement” and “LinearElementPart” serve for anchoring localisations of “NetEntity” instances via “AssociatedNetElement”.
The classes “NonLinearElement” and “NonLinearElementPart” serve for anchoring localisations of “NetEntity” instances via “SpotLocation”. 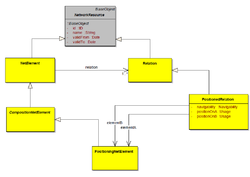 In RailTopoModel those four nodes and three edges are represented as seven “NetElement” instances shown in the “Network element view” (Fig.2).

These relations are expressed more compactly using a matrix: